In fact it's amazing they can fit it in in so short a time. But alas we had but one day, and that lasted from 10am to 9pm just at the show.

We hit the road again and took the Interstate! I know practice what you preach! But we have a deadline to meet in Pensacola which is 500+ miles away so we broke our own rule and “super slabbed” it to Tallahassee.

We stayed at the Elks for the night, got a tremendous welcome and horned in on dinner with the Lady Elks who were having their meeting. Meeting with and talking to the local members soon made the evening fly by, and we will have to come back again to see all the sights they told us we must see in the city.

Next stop Pensacola, renowned for being the training center for Naval Aviators. We were here to meet up with Wayne and Lynne from San Diego, fellow member of the the “Shanty Shakers” RV club with whom we've had several enjoyable rallies. Wayne and Lynne are heading to visit relatives around Naples FL and we worked out that we would all be around Pensacola about the same time so we arranged to meet at the Elks there.

Apart from just getting together there was another reason to meet up. Wayne owns a DeLorean car and I've been making a painting of it based on a photograph he sent me. He was very pleased with the result. 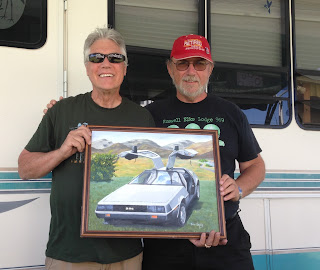 Wayne and I also wanted to visit the Naval Aviation Museum here. The girls didn't seem too interested so we went without them!
All the excitement at Fun n Sun set me up for a big disappointment when we got to Pensacola and the Naval Aviation Museum. I'd been there before some 30 years ago and had fond memories of it. Back then, if I remember, most of the exhibits were outside. For the sake of preservation they have mainly been moved inside, but now they are so jammed in it's almost impossible to take photographs, and it can get confusing too. The tram ride around the flight line was canceled due to a vehicle breakdown so that probably didn't help. Wayne wanted to see a particular airplane that was pulled out of a lake in San Diego and that is apparently waiting to be restored and it can only be viewed from the tram ride.
Wayne enjoyed it and even put up with me jabbering on about engines, pilots, airplanes the way I do when I get an audience in an airplane museum. We all went to the local Irish Pub for dinner after and if you happen to be in Pensacola I'd recommend McGuire's. But expect a ½ hr wait, it's very popular.

Wayne and Lynne headed south while we stayed for the rest of the week and explored the “Panhandle”, which is as the name suggests, the western part of Florida that is shaped like – a pan handle!

30+ years ago when we first came to the states, we drove across to this area from New Orleans. We had happy memories of Fort Walton Beach and Destin, which were sleepy little beach resorts when we visited them around Thanksgiving in 1983.

Not any more! The beach can't be seen for tower blocks and vacation homes. A blight of brightly colored boxes on stilts has spread around the whole of Florida's coastline. I hope we find some unspoiled areas somewhere. We are getting tired of the sprawl.
We did find some less developed beach down in Port St Joe and Indian Gap but there were “For Sale" signs everywhere so it can't last. Being Easter Weekend it was busy despite it not being a public holiday in the US. In Europe it's a 4 day weekend and everyone usually heads out hoping for good weather on the first camp-out of the year. We actually had snow one Easter in Holland!
Probably a lot of our discontent has to do with our trip to Europe which is looming on the horizon. It's less than a month away now and we have to do a few chores before we leave. We sketched out where we're going too be, and when, so we can organize a few last minute doctors visits and the cleaning and storage of the car and rig.

We had to get back to Tallahassee after the list of places to see we got from the Elks, so we're going to spend at least 3 nights camping at the Lodge again. I tried my favorite phone app. Which finds local Micro Breweries and it found 5 within 5 miles! After a couple of false starts due to the addresses not being up to date in the app. We found the Proof Brewery where they had several dark beers for us. We even filled our growler for the first time in ages so we could continue to enjoy their Brown Ale back at the rig. 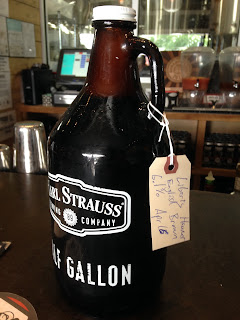 Our first night at the Lodge was quiet as they weren't open! The second night however was quite amazing. We were welcomed with open arms, the people we met the first time we stayed all came by and said “HI welcome back”. Then we were invited to join in on their monthly “Beer, Blues and Burgers” evening. As the name suggests there were made to order burgers, a live blues band and Yingling beer. Can't beat that for $5!

We explored and found 2 dartboards in the adjacent room, so I grabbed our darts from the rig and we played a couple of practice games while listening to the music across the bar. Several people wandered by and remarked how good it was to see somebody using the dart boards. How they used to play but stopped for some reason. How much fun it would be to play again etc, and the next thing we knew we were being told we couldn't leave Wednesday but had to be there on Thursday because they were all going to bring their darts and we all were going to play!You just can't beat an Elks welcome!
So we ended up staying until Sunday and explored.

Goodwood is a local home, it would be a “Stately Home” in UK probably. The family founded a charitable trust to preserve it and left it fully furnished down to the cutlery and even left their clothes in the closets!


The Tallahassee Auto museum provided many subjects for drawing and painting. The collection included MUCH more than cars. There were motorcycles, outboard motors, guns, knives, pedal cars, fishing equipment, boats, it just went on and on. 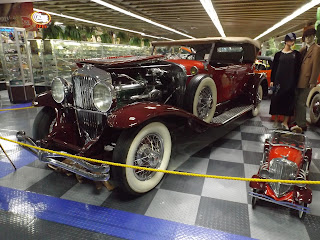 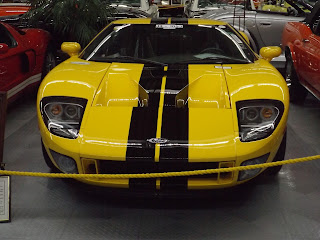 We had a side trip up to Georgia, which is only 25 miles north of here, to visit Thomasville and the Pebble Hill Plantation. Another charitable trust left with the entire contents, the house was the center of a horse and hunting dynasty that included thoroughbreds, show jumping horses, polo ponies and hunting dogs of all shapes and sizes. Beautiful both inside and out but unfortunately they don't allow photography inside. 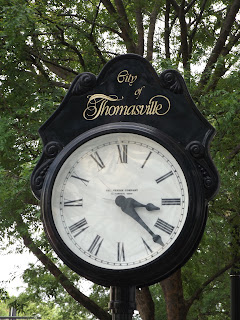 All in all a very busy couple of weeks.

Posted by Brian and Barbara RV'ing at 5:08 PM 4 comments:

Barbara gets sworn in at the Eagles Lodge on Saturday, and we decided to stay at Holiday Travel one extra day, which gives us an extra day to get packed up!!

The winter is officially over, we left our “Winter Quarters”. Barbara is now an official Eagle and my initiation is set for April 28th so we'll have to be back around Leesburg for that.

Our first stop for the 2017 travel year was the Thousand Trails in Orlando. It's free, there is lots of room and there's an AIRSHOW!!

This particular Airshow is called Sun 'n Fun and it's a Fly In, which for our motorcycle friends is like a Rally except instead of riding your motorcycle and camping you fly your airplane and camp! Like the Goldwing Motorcycle Rallies there are lots of seminars on subjects from safety to how to build your own plane! The Experimental Aircraft Association (EAA) are the big organization here and on top of all the above they have a week long airshow going on!

My favorites are the “Warbirds” World War 2 era airplanes, all privately owned and performing aerobatics for the crowd.

In case that gets boring there are aerobatic solo displays, team displays, private jet displays and fly by's from the various light airplanes and kit manufacturers of their products. Oh yes and the Blue Angels perform 3 times during the course of the event. Talk about airplane heaven! I was in it.

To help Barbara keep her sanity we decided to spend an extra $20 each for preferred seating which turned out to be a bargain! Once in the shaded area with seating provided we discovered air conditioned bathrooms, free bottled water, and Barb's favorite – free massages!! We more than made up for our $20 with bottles of water.

This event is unlike the Airshows elsewhere. Instead of fences between the public and the static and operational areas to keep people out, they have a wagon to drive you around the whole flightline so you can get up close to the aircraft! As you ride around there are all kinds of things taxing around you. A wonderful idea! Then when you get finished with the ride you get off and you can WALK around the airplanes and talk to the pilots and crews, They trust everyone to be responsible and safe, and everybody is! Amazing.

This airshow had something else too. NIGHT FLYING. Normally the show is over and everyone is leaving for home long before the sun goes down. Not here. The show stops for a couple of hours then as the sun sets the show starts again with aerobatics IN THE DARK! The aircraft have multicolored lights and pyrotechnics so you can follow them thru the air. One act had a powered hang glider with flares on the wings, shooting fireworks sideways out of the plane as it buzzed around. The commentator did mention that the pilot had taken some care in developing the act due to the fact that the nylon wing of the aircraft tended to catch fire if the flares or the fireworks came into contact with it!! And as a postscript he mentioned that the pilot was handicapped having lost the use of his legs some years ago in a hang gliding accident!


With all the static displays of aircraft, manufacturers displays of engines, instruments, parts and materials for building airplanes, the various associations for particular makes and models of airplanes, vintage, home-built, kit-built, warplanes, jets, the seminars, dinners, movies and talks by famous aviators it's no wonder this even lasts a week. In fact it's amazing they can fit it in in so short a time. But alas we had but one day, and that lasted from 10am to 9pm just at the show.
Posted by Brian and Barbara RV'ing at 5:15 AM No comments: