So thanks to Flanagan Mazda in Missoula, Wayne and Lynn and North American RV Park for rescuing us from a bad day and making it into an exceptional day!

So what are our first impressions of Glacier National Park?
TRAFFIC!!

Seemed like all the turnouts were full, the lodges are supposed to be nice but there was nowhere to park.

The scenery is spectacular though so when you eventually find somewhere to stop it's very nice.
It turned rainy the second day and rained for another 3 days on and off. We discovered a local bar just down the road that had good draft beer and a couple of dart boards so between exploring Columbia Falls and Whitefish we managed a little practice for our winter darts nights!
It was relaxing being in the same spot for 7 days and I broke out my paints for a while. We spent a little time cleaning up the rig and restocking the fridge, then sat with the maps and decided where we would go next.
I have a painting event coming up in October in Bisbee Arizona so we looked at a straight line south from Glacier and there is a single road that goes from Kalispel Montana to Wickenburg Arizona! Hwy 93. We are into roads like this one, no Interstate, scenic. We are in no rush so we decided we'd do it. Besides it's getting cold at night so time to head South!

What a spectacular road 93 turned out to be. From Kalispel it runs down the west side of Flathead Lake and into the mountains passed the National Bison Range near Missoula. From there it follows the Salmon river which is stunningly beautiful and for the most part unspoiled. We stopped in Idaho in the town of Salmon and discovered the birthplace of Sacagewea who was the guide for Lewis and Clarke's expedition.

The next day we turned off 93 onto 75 which is marked as scenic on our map. This followed the Salmon into the Sawtooth National Recreation Area and over the Galena Pass and picked up the Big Wood river thru Sun Valley.

In all it was 500 miles of continuous beauty, I don't believe we have ever experienced anything to compare with it.

At the end of all that we stopped near Jerolme Idaho at the Elks Lodge. What a night we picked! They have their own golf course and it was their annual charity golf tournament. Dinner was a roasted pig! We no sooner sat down than we were pulled into a conversation with Dave and Liah who told us what was happening. There were raffles and door prizes. For every drink you bought you got a ticket. Every 15 minutes they pulled a ticket and you got to choose a prize. My ticket was the first one pulled! Then Barbara won a big gift basket in the other raffle, we had a blast.

Dave and Liah arranged to hook up with us the next morning to show us one of the local sights.

One of great things about visiting Elks Lodges is talking to the members and finding out the great places to see and do. Dave and Liah told us about a new National Historic site being developed nearby.
Minidoka was one of the camps that the US government opened in 1942 to house over 9000 Japanese American who were forcibly moved from the West Coast after Pearl Harbor. The size of the place is mind boggling although little of it remains. When it reached it's peak it was the 7th largest population center in Idaho. Whole families were housed in a single un-insulated tar paper building with no bathing facilities except in a separate communal ablution block and a single pot belly stove for heat in Idaho's bitter winters. Until the camp became self sufficient with its own farm the interns were forced to subsist on poor quality rations brought in by train. They were eventually liberated after winning a major court case but remained uncompensated for their internment.

A very thought evoking place and thanks Dave and Liah for showing it to us.
We also visited Twin Falls Idaho where surprisingly there are twin waterfalls! The snake river has carved a huge gorge that runs east/west across several rivers and streams which naturally tumble down the walls of the gorge. The big fall is know locally as “The Niagara of the West” as it has a greater drop than Niagara although it is much narrower.

Posted by Brian and Barbara RV'ing at 7:57 AM No comments:

Making a bad day into a good one

We moved on to the Port Townsend Elks Lodge campground while we explored the area some more, catch up on laundry, shopping etc. This is a very pretty area and we have had so much fun exploring it. I wonder what adventures await us at our next stop?

The “Camp Host” has a beautiful old trailer, a 1949 Sparton. If you have seen the TV show “Flipping RV's” you will have seen a few samples, driving by it every day finally made me want to sit down and make a watercolor painting of it. 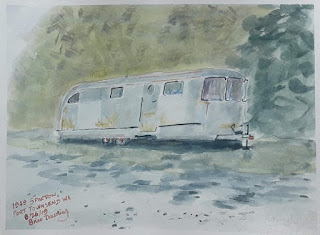 While I was painting the owner, Joan, came out and took pictures of me painting. Kind of a circular arrangement! We got talking and discovered similar backgrounds, Joan was an architect and used to enjoy drawing and painting before her career took all her time' She had moved around the country. She likes old cars, boats and trailers.

I gave her the painting before we left and she was delighted.

We reluctantly packed up and headed East, But wait! There's a big bay in the way. Either we drive around it thru all the Seattle area traffic or get a ferry across from Port Townsend to Coupeville. Ferry it was! And at $87 for 2 people the RV and the car we thought it a reasonable value as opposed to the time, fuel and frustration of going the long way around. 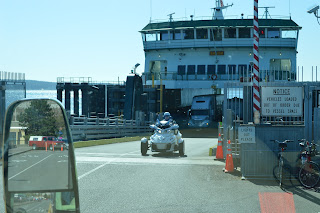 We had a gorgeous drive along WA20 past Mt Baker, which is part of the same chain of volcanoes we've been visiting on our way north. The Cascade Mountains are superb and the road excellent with very little traffic. One overnight stop in Riverbend CG and we were in Coeur D'Alene Idaho with plans to stay until after the Labor Day holiday, which for the UK readership is the office “End of Summer” holiday similar to the August Bank Holiday in UK. It is also the signal for all the swimming pools to close even if the weather is in the 90's like it got here for a few days. Especially nice for us campers is that schools go back after Labor Day and so the crowds in campgrounds die down. 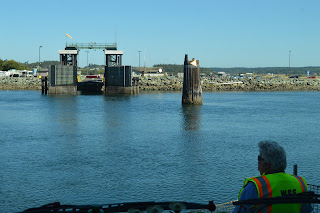 Coeur D'Alene is on a big lake named (Of course!) Lake Coeur D'Alene. We took a picnic and drove around it, stumbling across a National Forest Service CG named Bell Bay that looks down on the lake. We stopped for a picnic and enjoyed the perfect weather. 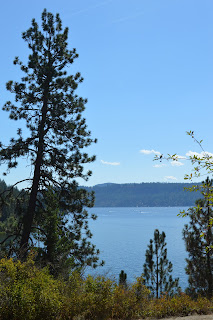 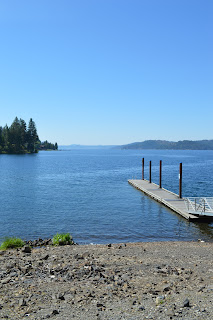 We are at this point of our travels heading almost due East. Objective Glacier National Park in Montana. This will be our last stop exploring before we turn South towards Casa Grande AZ for our winter quarters. It's hard to believe that we've been on the road so long. It doesn't seem 5 minutes since we were pulling in to San Diego, our first big stop of the year. 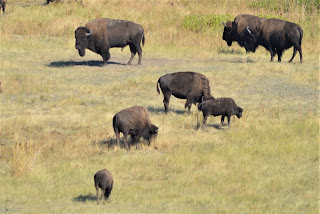 Another drop dead gorgeous road, Hwy 2, brought us to Kalispel Montana where we had planned several days exploring.

The Miata keys that had mysteriously deprogrammed themselves in Bend OR decided to do so again. We pulled in to the CG and uncoupled the car but when we tried to start it there was nothing. The red light signaling that the security system didn't recognize the key was flashing just like last time.

I called the Mazda dealer that I found online thinking they were in Kalispel, but they told me they were in Missoula which is 100 miles South. For a minute I panicked, my breakdown service wouldn't tow it that far.

Then a DUHH moment. All we had to do was couple it back up to the rig and take it there ourselves! The next morning we did just that, driving along the Western shore of Flathead Lake thru more wonderful scenery. Montana seems to have cornered the market on pretty roads.

We delivered the car to the dealer and braced ourselves waiting for the “We can't get to it for X number of weeks/days” statement. Instead the very nice service writer said “OK we'll get on it right now, should take a couple of hours, there's a public park around the corner where you could park your RV, you can wait in our customer area or we'll call you when it's ready” 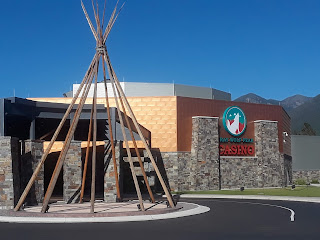 We were awestruck by how nice they were and how quickly they jumped on it. We parked the rig and had lunch then walked back to the dealer. They came and talked about how we used the key fob and the unprogrammed spare key that we use just to unlock the steering while we tow the car and came up with a whole new theory about why the problem is happening.

They believed that it wasn't they keys that were the problem (100% different from the last dealer). They think the unprogrammed key does unlock the steering BUT at some point the car security system decides somebody is trying to steal the car with a “False” key and then locks ALL the keys out. It's the car computer that is doing it not the keys.

That had us baffled but they were quite positive. I asked them to reprogram the spare key so that it would be recognized by the car and also the existing “Valet Key” which we would use instead of the fob. They looked at us like we were a pair of dim wits (But in a nice way).

“We already reprogrammed the spare key, and there's nothing wrong with the fob or the Valet Key”

UH? The last dealer said the fob was unprogrammable and it would cost nearly $1000.00 for a new one! They also wanted $150 to reprogram each key which they said had lost their programming.

“Nope” said the tech, “It's the car not the keys, everything is working like it originally was except you now have a functioning spare to unlock the steering with when you tow”

We wandered over to the service desk to pay the bill expecting several hundred dollars as the bottom line. Hurrah! $130 total and just a couple of hours. Our faith in main dealer service shops has been restored!

We had lots of time left in the day so we headed back North this time up the Eastern side of Flathead Lake to a very nice RV Park in Coram just outside Glacier NP that our great friends Lynn and Wayne Selden from Shanty Shakers had recommended, North American RV Park. And we even got their weekly deal where you stay 7 nights and only pay for 6. So thanks to Flanagan Mazda in Missoula, Wayne and Lynn and North American RV Park for rescuing us from a bad day and making it into an exceptional day!

Posted by Brian and Barbara RV'ing at 7:17 AM 2 comments: