I can do the Generator service, engine oil change and chassis lube myself.

I was sitting outside the rig in the sun fiddling with something or other and a strange car rolled up. I glanced up and a familiar Australian voice said “How's it going Mate?” and there were our 2 Aussie friends from Florida last year! 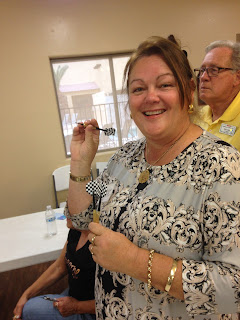 We had surprised the heck out of them in Las Vegas a couple of months ago and they had decided to turn the tables on us.

What a great surprise! Before long we were catching up on the news, dragging them along on a tour of thee park, introducing them to the darts evening (Which they seemed to take too like ducks to water!) and piling in the car to go out to dinner at Olive Garden. 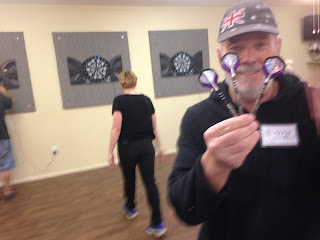 I don't think Barbara and I stopped grinning for days, these kind of meetups are exactly what we wanted from a fulltiming experience. We are so lucky to be able to do this and to have met such amazing people. 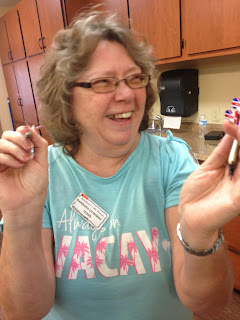 Dinner out has had us working hard to stay on our diet. Yes we decided to lose weight again and the park has a Weight Watchers group so in we jumped.

The “Freestyling” plan seems to suit us as we can plan ahead for a “Splurge” and eat meals with low point the rest of the day and use more for dinner. There are also “Roll over points” when you don't use all your points one day. They can be applied to the following days for a glass of wine or something similar as a treat. So far I've lost about 15 lbs and Barb around 6.

We don't enjoy be overweight so we need to make permanent lifestyle changes to avoid letting the weight creep back on like it has over the last 3 years.

A lighter wallet wasn't part of our plan but after the brake calipers and rotors were replaced the brakes were still spongy. Turns out the brake booster (Servo in UK) was leaking too, so another day in the shop, which turned into a long day after the wrong part was delivered to them. They have fixed the charge light problem and done an oil and filter change on the engine too so that's more off the list.

Next week we get the slide topper awning replaced. I'm gathering the parts for the Generator service too.

To fill in time I've been building another RC model airplane!

Posted by Brian and Barbara RV'ing at 9:54 AM No comments:

Arizona for the winter.

My sea legs had come back and fortunately I felt fine the whole way, but I did stay out of the theater and other dark confined spaces where I was more likely to feel motion sickness.

Once we got to Sundance 1 our “winter quarters” it felt like we'd come home. If you haven't guessed we really like this place, we've been here 3 out of the last 4 winters.

There is so much to do both in the park and locally. It's a little more remote than Leesburg was, although I did enjoy all the art events and societies there. I'll have to dig a little deeper to find some here.

The resort is, as usual, immaculately kept. It seems like every time you go out somebody is landscaping. Everyone waves and wishes you good morning or afternoon.

It's 2 years since we last wintered here but people are stopping by and welcoming us back. Our friends Paul and Karen were already here and invited us to join them at the Elks Lodge for the Friday fish dinner. We had a full table with Bill and Terry and some more new friends who's names escape me! (Getting old).

We soon got set up with our outside mats, chairs, grill etc and we pulled our bicycles off the rack to find one of Barbara's tires was rotted out. More stuff for the maintenance list!
That list has grown again, seems like every time I get it almost done it fills back up.
Currently we need.

So apparently we're going to be busy!

To ensure we were REALLY busy we got back into the darts league (2 afternoons a week), we joined the shuffleboard league (3 mornings a week), Photo club (1 morning every 2 weeks), weight watchers (1 morning a week), and Barb signed up for a park stage show

In a fit of insanity I also decided that I needed to buy a Radio Controlled (RC) model airplane. I have been an airplane and model nut off and on all my life. Somewhere I saw an ad for one of the new technology gliders which are made mainly of expanded foam. No more weeks of building with balsa wood and glue, they come ready made in a box.
Even better they come just about complete, with a motor, servos, speed control. All you need to do is assemble about 10 parts and install a radio system (Not supplied).

What really surprised me was how cheap all this stuff is. Back in the 80's when I last played with RC, the radio equipment was expensive and there was no such thing as an electric powered model. Now the complete model was just over $100 delivered and the radio was $40!!

Pretty soon I was the proud owner of an RC glider.
I thought I read in the ad that the wingspan was 54”, which would be handy in the RV. Unfortunately the HUGE box that arrived contained a model that was 54” LONG but the wingspan (Width) was 2600 mm which for the Metric challenged comes to abut 8 FEET!
It was difficult getting the thing in and out of the door.

I assembled the thing, programmed the RC radio (Using the computer yet!) and set off for a big open field. And promptly crashed the model into that field!
My repair skills were then tested!

We had been talking of getting on a diet after the cruise, I was so fat I couldn't fasten the jeans I'd left in the RV for when I got back! Luckily the park has a weight watchers group and we signed up.
Weigh in was a shock as I weighed 262 lbs at weigh in.

We lead a different life style when we hole up for the winter. Instead of driving everywhere we ride our bikes, and we are much more active doing the things we like here, so we both lost weight the first week.

They have a “Freestyle” system now that is really easy to stick too and a phone app the will tell you the WW points of any item in the supermarket just by scanning the bar code on it. They even have “roll over points” so if you indulge once in a while you can plan for it and save points from previous days.

The local RV place Norris RV did some work on our rig last time we were here and I was impressed, so we called by to talk about our current maintenance list. Unfortunately they don't do the mechanical work we need but we did make an appointment for them to replace the awning that got torn up by the wind one the way here.

They recommended a company called Whitfield Auto for our mechanical work.

First on the list was the brakes which have been grinding lately. It sounded like it was coming from the front right. When they took it apart it was the rear right that was grinding and the brake rotor was completely torn up. A full brake service was required and we ended up with new rear calipers and rotors and new front pads. Not cheap but we should be good for several years now.


While they were underneath they replaced the fuel filler hose that had been leaking.

We have a plan with them to do the rest of the work one day at a time so we don't have to stay in a hotel, next week they'll do the coolant hoses and try and find the charging issue we've been having. I can do the Generator service, engine oil change and chassis lube myself.
Posted by Brian and Barbara RV'ing at 7:13 AM No comments: