The house is painted!
Well the outside anyway, and I must say it looks pretty good. There is some renovation to do on the trellis in the yard which was much more badly rotted than I though. In fact  I wonder how it was still standing with 2 of the corner posts all but gone.

The rest of the place needs to be as good.

We actually got the entire back bedroom cleared out, then we moved stuff out of the office/bedroom to start cleaning that out and cluttered the back bedroom again! Still the office/bedroom is major league clutter, and this morning's 30 minutes produced a half truck load of donations to Goodwill. The recycle, trash and yard waste cans were stuffed to overflowing this week too. In fact the yard waste will be full again tomorrow when I put the stuff that's presently piled up on the lawn into it.

Unfortunately the shredder we've had for a couple of years died under the workload we put on it. Barb says that the Goodwill store will shred stuff for us so we'll have to put together another load for them!

As we get more stuff ready to go, the less we want to do yard sales. Most stuff now goes on Craigslist or E-Bay. You usually get decent prices on stuff that sells on those 2 sites whereas yard sale customers want everything for $1.

I just worked out that in 12 days I can apply for Social Security and Medicare! Barbara has already applied for hers and is getting a UK pension. I've applied for a UK pension already.

In 2 weeks we will be at our first big RV Rally "Escapade" in Tuscon Arizona. I'm like a kid on Christmas Eve, I can hardly wait. The list of seminars is HUGE and there are all kinds of entertainments going on. Then we'll be meeting new and not so new friends with a common interest in RV'ing and full timing. I really must take lots of pictures, that's what is lacking here in the Blog lately.


Posted by Brian and Barbara RV'ing at 8:10 PM No comments:

Sometimes I'm amazed at how things happen when you want them to. I often find that when I'm scanning Craigslist for something I just decided I need, the item just pop's right up. I often continue to search for the same item after I've bought one in case something better is out there but nothing else will be advertised. I can hear the doubters mumbling "Yeah, but it's a one off event". I don't think so, it happens to me a lot.

OK so what? Well this weekend we have left the house in the painter's hands and we're camping at Thousand Trails Pio Pico in Jamul CA. It's only 25 miles from home so it's not a big adventure! It's very popular with Snowbirds.

Barbara and I have decided that depending on when the house sells we want our first big Full Time adventure to be a trip to Vancouver BC. We were up there for a couple of days on our motorcycle 2 years ago and loved it. A month or so exploring the area and going up to Banff etc. would be just great, depending on the time of year. We will have to drop in to South Dakota along the way to set up domicile there first but it'll only take an extra a couple more weeks (maybe)...

And in steps the hand of coincidence.

Pio Pico was completely full this weekend. It's Presidents Day weekend, the schools are off and the snowbirds are here in force. That and temperatures in the 80's in February brought out everyone.

Pio Pico is split into North and South on opposite sides of Otay Lakes Road. South has all the facilities, 2 pools, kids and adult rec facilities and most of all Full Hookups. South fills up first. You can't reserve a site, it's first come first served. I got there Thursday at 11am and the South side was already full. That means you have to go into the North side where there are only partial hookups. Water and electrical, no sewer. There are 2 dump stations there and a "Honey Wagon" comes around when you want to dump your tanks.

They have a system they call "Cross Over" which works pretty well usually. When you get to the Ranger station they tell you "South is full North Side only" then they ask you "Do you want to go on the cross over list?". If you say yes they write your name on a clip board in the order people ask to be on it. I was number 4. You go find a spot on the North side and set up for the night.

Next morning at 8.30am you go back to the ranger station on foot, car, bike. Just don't bring the rig. They have a white board with the numbers of the sites who are leaving that day or left already. The ones that are vacant right away are circled in red. Anyone on the list can then go look at the various sites and decide which ones they'd like or dislike. Then everyone goes back to the Ranger station and at 9am the ranger reads out the names one at a time starting with the first one on the clipboard.

That person gets first choice then on down the list until all the sites are spoken for. Each person then gets a "Cross Over" paper and goes to the site they selected and sticks it on the utility pedestal. It has the person's name and their departure date. Nobody else can pull into that spot once the present occupier leaves no later than 12 noon. If you picked a spot that is currently open then you can get your rig and move in. Otherwise you come back after 12 noon. If there are more people than open spots then the last ones on the list are out of luck, which is why you leave the rig there until you get a spot otherwise your old spot may have been taken before you get back to it!

So where does the coincidence come in?
The crowd was milling around waiting for the "Sewer Sweepstakes" and I was standing next to a guy chatting. I noticed his Canadian accent. And he's from Vancouver BC! We got on great and we took our wives out for Valentines Day dinner at one of our favorite local hangouts Brody's Bar. We exchanged addresses etc. and we'll try and hookup when we get to Vancouver!
Then we went over to the pool/hot tub and talking with some people there they were from BC too!
Maybe it's not a stunning example of the laws of relativity,  but I like to think it's special.
BnB
Posted by Brian and Barbara RV'ing at 7:27 AM 1 comment:

Some steps are bigger than others.

Some small steps don't seem to advance you very far, like a trip to the Goodwill store we made on the way to do the grocery shopping. A trunk full of clothes we won't wear when we head out permanently, a box of books that were just taking up space in the back room. A trip to the scrap yard to get rid of all the scrap steel that has built up over the last 8 years which only nets $9.
Those small steps don't seem significant at all until you suddenly realize that you cleaned out a whole room full of memories, junk, clutter, whatever you want to call it. It's all GONE and all the small steps just became a big step.

Then there are steps that you feel kind of tingly when you take them. We just signed up for our Medicare Supplement insurance which (Hopefully) will take care of our doctors bills etc. in retirement. It hits you that you won't have the security blanket of the medical insurance paid through the company anymore. You will have to pay for all of it yourself from now on.

I have to admit to taking a swallow to get the lump out of my throat when I signed that piece of paper.

Listing some more stuff on e-bay and taking pictures of furniture for an ad on Craigslist seems so easy after that but they are more small steps taken.

It's funny how listing things on Craigslist goes, some things you list and nobody calls. You list the same things a week or so later and there are dozens of calls.

Some people call wanting to know your lowest price BEFORE they even come and look at things. Other people come round and pay you full asking price without blinking, I just sold our old treadmill in 5 minutes and for the full asking price. Boy did the spare room look bare when that was gone.

The ones I really like are the people who call and ask what else you have and what you want for it. I mean, do they really expect you to trot off a list of things and give them a low-ball price when you don't even know whether they'll show up?

Then there are the ones that tell you they'll pay the full asking price if you'll hold it for a day/week etc. Really? I'll turn down somebody else's money for a vague promises of some guy who might show up sometime.

We did sell a patio furniture set to a lady who gave us the cash for it then asked if we could keep it for her for a few days. We YES! If she didn't show we could sell it again. In the event it was nearly 2 weeks before she managed to come get it, then she took it down to Tijuana and sold it in the flea market there!

Even better are the people giving stuff away free on Craigslist. I get so much stuff that way.
People tell me it's all a hoax there never is anything free.
All I can say is that if you see something and it's been listed for more than 20 minutes then it's GONE. When I call I'm ready to pick it up immediately, I don't expect the owners to hold it just in case I happen to finally turn up. I just got a leather swiveling, reclining drivers seat for our RV for nothing,
Cool!

Never mind we're off to Balboa Park to cross off some San Diego Bucket List items. We have free tickets for the Living Artists Museum and the San Diego Art Museum is free on Super Bowl Sunday. Spanish Village the Art "Commune" for a better word is always free. Lunch in the park and dinner on the way home. Doesn't get much better than that. 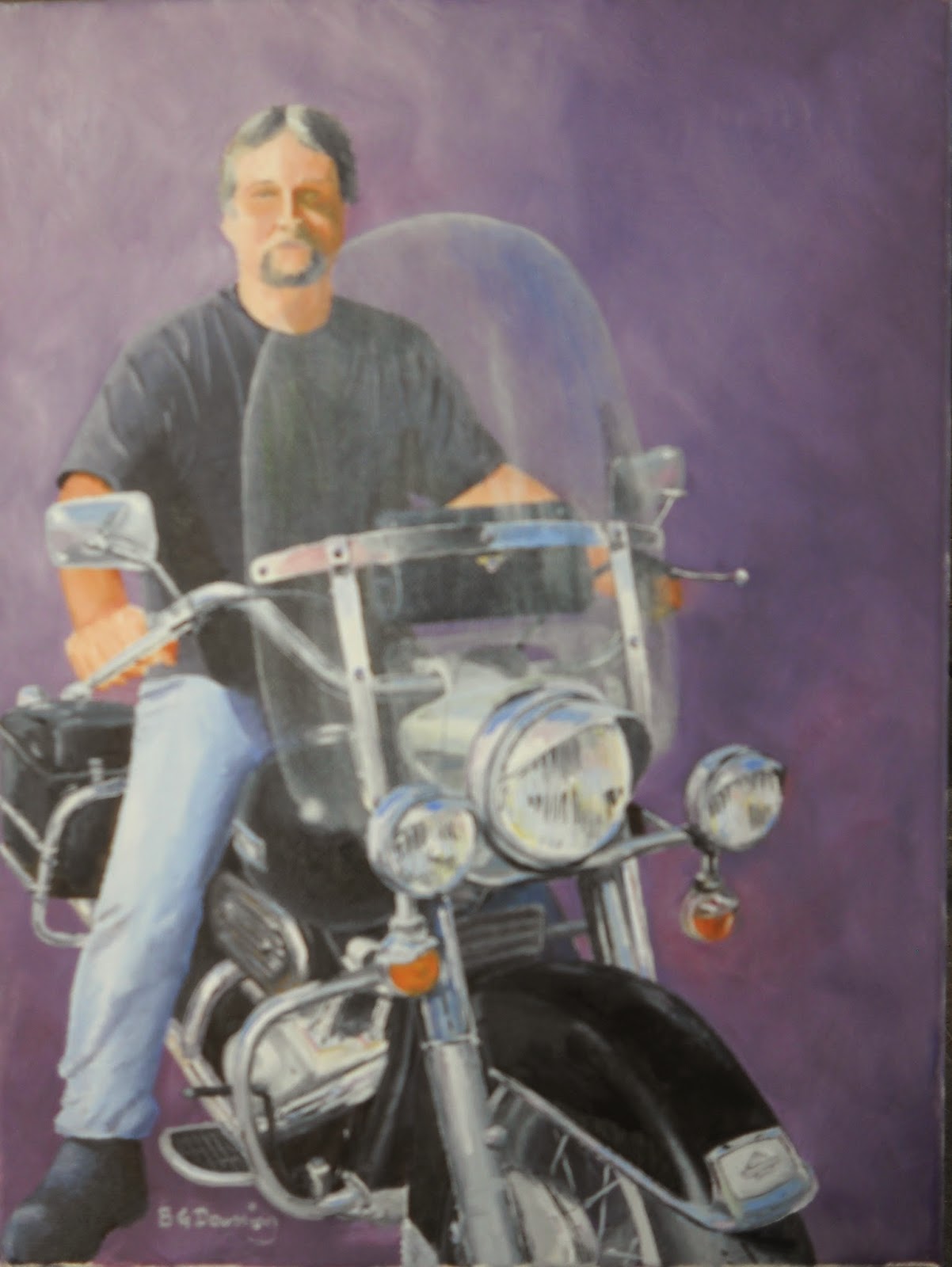 I installed two count down timers on  my laptop. The top one gives days, hours, minutes and seconds to Barbara's retirement day.
The second one to mine.

every second is a small step and every day a bigger one.
Kind of morbid at times!!

Finally we started the conversation with a Realtor today. That's a spooky feeling because now we are REALLY getting committed. I have to admit that I didn't return her call this afternoon, my excuse being that I wanted to talk to Barbara about it when she got home from work.

Posted by Brian and Barbara RV'ing at 6:32 PM 2 comments: